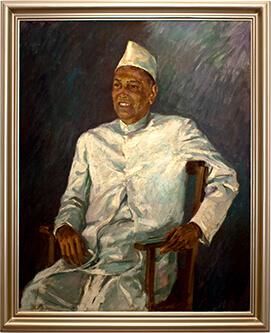 Kasturbhai Lalbhai was one of the pioneering Industrialists of pre and post independent India. His astute business sense saw the Lalbhai group grow from one single textile mill to a conglomerate of seven mills, a large chemical and dye stuff complex set amidst a flourishing township. He enriched the educational, social as well as cultural scene of Gujarat and especially Ahmedabad with equal distinction. He along with Vikram Sarabhai set up in Ahmedabad, some of the most premier institutions of education and research of India. As Chairman of Anandji Kalyanji Trust he undertook the renovation of some of the most famous Jain temples like Dilwara, Ranakpur, Taranga, Girnar and many more. With an eye to detail he meticulously had them restored to their original glory. Such was his understanding of architecture and eye for the aesthetic that Louis Kahn called him a natural architect. In the words of Shri B. V. Doshi, "He is a man of vastness, a classicist…He has a feeling for the grand, for the memorable and hence is the right person to build institutions and renovate temples. He represents things that are good, grand, and of permanent value. "